Royal Dutch Shell RDSa. cut its dividend for the first time since World War Two on Thursday as the energy company retrenched in the face of an unprecedented drop in oil demand due to the coronavirus pandemic.

Shell also suspended the next tranche of its share buyback programme and said it was reducing oil and gas output by nearly a quarter after its net profit almost halved in the first three months of 2020.

“Given the risk of a prolonged period of economic uncertainty, weaker commodity prices, higher volatility and uncertain demand outlook, the Board believes that maintaining the current level of shareholder distributions is not prudent,” Shell Chairman Chad Holliday said.

For years, Shell has taken pride in having never cut its dividend since the 1940s, resisting such a move even during the deep downturns of the 1980s.

Shell is the first of the five so-called Oil Majors to cut its dividend because of the fallout from the coronavirus crisis. BP and Exxon Mobil (XOM.N) have said they will maintain their first quarter dividends while Total (TOTF.PA) and Chevron (CVX.N) have yet to report first-quarter results.

Shell said it would reduce its quarterly dividend to 16 cents per share from 47 cents for the last three months of 2019. 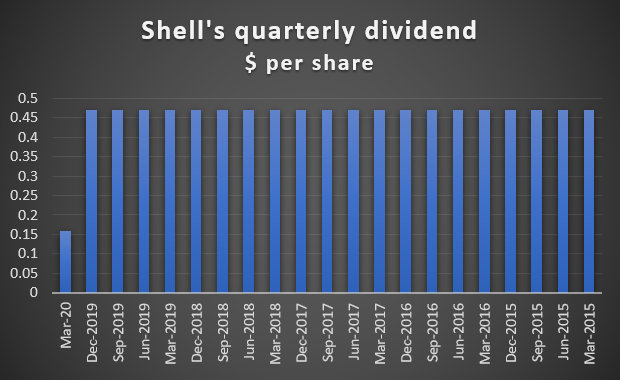 The dividend cut also comes after Shell this month laid out the oil and gas sector’s most extensive strategy yet to reduce greenhouse gas emissions to net zero by 2050.

“The 66% dividend cut is a necessary evil to reinforce Shell’s capital frame and position it for the offence on the energy transition,” JP Morgan analyst Christyan Malek said. 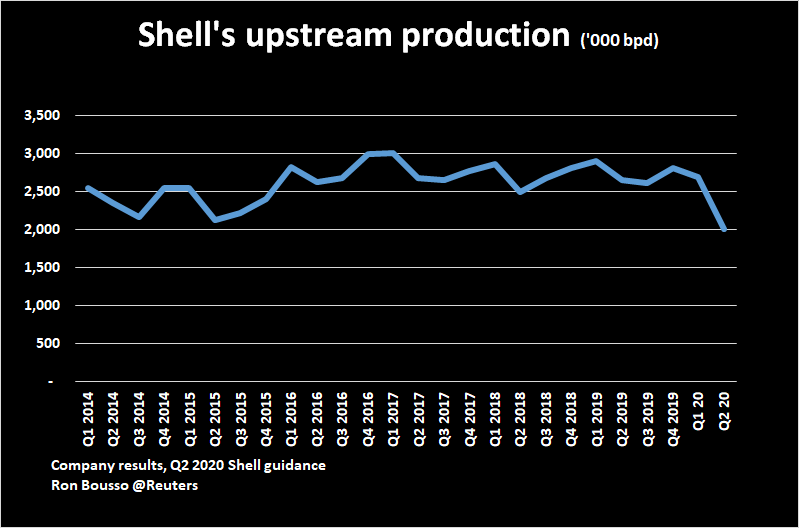 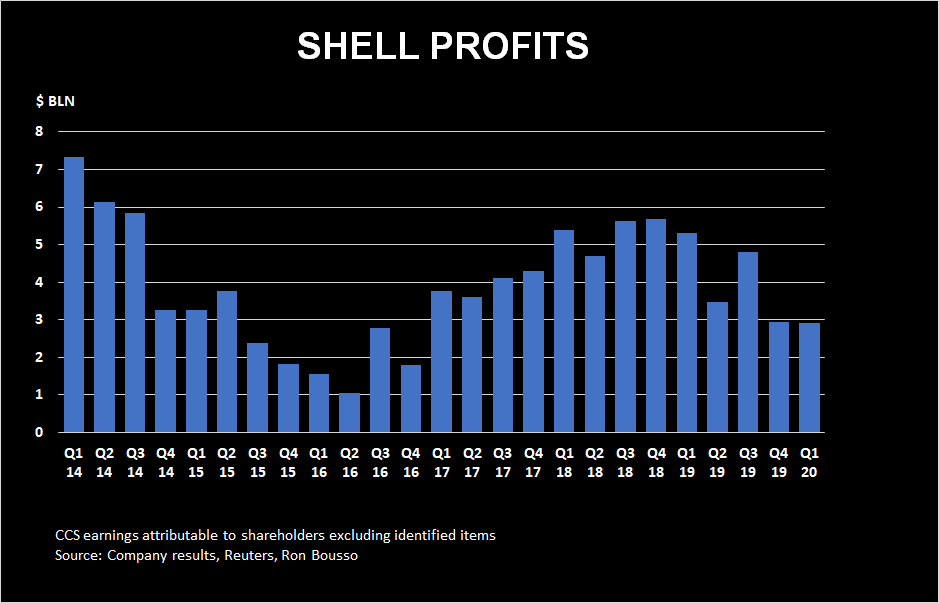 Following years of deep cost cuts after its acquisition of BG Group for $53 billion in 2016, Shell had previously planned to boost payouts to investors through dividends and share buybacks to $125 billion between 2021 and 2025.

Outside the Oil Majors, Norway’s Equinor (EQNR.OL) became the first large oil company to cut its dividend in response to the current downturn, reducing its first-quarter payout last week by two-thirds.

Global energy demand could slump by 6% in 2020 due to coronavirus lockdowns and travel restrictions in what would be the largest contraction in absolute terms on record, the International Energy Agency (IEA) said on Thursday.

Shell last month said it would reduce capital expenditure this year to $20 billion at most from a planned level of about $25 billion and also cut an additional $3 billion to $4 billion off operating costs over the next 12 months.

Its first-quarter net income attributable to shareholders based on a current cost of supplies and excluding identified items, fell 46% from a year earlier to $2.9 billion, above the consensus in an analyst survey provided by Shell.

The company said it cut activity at its refining business by up to 40% in response to the demand shock.

Shell said it expected to cut production of oil and gas in the second quarter to between 1.75 million and 2.25 million barrels of oil equivalent per day (boed) from 2.7 million boed in the first quarter.

Shell’s gearing, or its debt-to-capital ratio, inched down to 28.9% in the first quarter from 29.3% in the fourth quarter, but was up from 26.5% in the same period a year earlier.

'W-shaped' recovery may be too optimistic, Fed's Powell suggests

A Peek Into The Markets: US Stock Futures Edge Higher Ahead...